Sándor Zelenák was born in Tatabánya in 1971. He entered Janus Pannonius University of Fine Arts (now part of Pécs University) in 1991, and graduated in 1996 as student of Sándor Pinczehelyi. He completed his Teaching of Fine Arts in 2002, and has been continuously exhibiting his artworks since graduation. Since 2001 he has also been actively contributing his artworks to charity auctions. He has previously been an art teacher at the Székesfehérvár kindergarten, specializing in creativity art activities for children. Before coming to Japan he also worked as a graphic designer and interior designer, making use of his consummate carpentry skills. Winning a Japanese government scholarship in 2006, he became a research student in the Department of Fine Arts at the Tsukuba University; then in 2008 was accepted into Master of Fine Arts course. He graduated in 2010. After that he worked as a freelancer, using experience of interior design and painting skill (Lumine Beer garden design, With the Style Fukuoka Art works). He is also working as an art teacher in the kindergarten, teaching creativity to the kids. 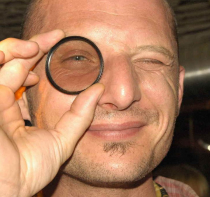